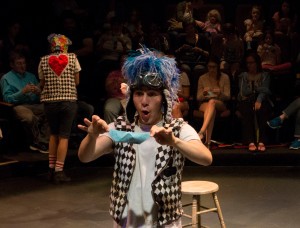 For the last four years I’ve been working with Underbelly,  a group of insanely talented artists: Stephanie Busing, Abe Koogler Gabrielle Reisman and Kristian Pina (designer, playwrights and stage manager) to create immersive journey plays that lead audiences into the unexplored parts of the theatre.  Like many good collaborations, ours came out of friendships and a blissful ignorance of how ambitious what we were proposing actually was.   Underbelly, has collaborated with The University of Texas’ Cohen New Works Festival, The Rude Mechs Fusion program, The Orchard Projects The Exchange, ZACH Theatre in Austin and New Victory LabWorks.  Making immersive theater lets me engage with collaborators and audiences in a more hands-on, raise-the-barn sort of way, that I sometimes miss as a solo playwright.   What I’m writing here focuses on physical space and audience experience, the two maps I’ve learned to rely on when making Underbelly work.

In many places, certainly in Austin and NYC,  the primary concern of theatre makers is space.  Immersive theatre allows you to find unusual spaces; your living room, a park, that ginormous beautifully bizarre church on Congress Street in Austin — somebody make a play there please! Finding an unusual space allows you to engage your community in unusual ways.  Negotiating with your collaborators about how to use the space and how to invite people to the space automatically starts new conversations about what theater can be and why you need to make it.  Lately, for Underbelly this conversation has been about fire escapes and how to use ushers when the audience is travelling.  I’m grateful for these conversations, they remind me of the myriad parts that make a theatrical experience.

The architecture of a space has a story to tell.  Just as the minaret or steeple draws our minds to God, and the plaza keeps us looking squarely at our neighbors, so any space you can make a play in has a story.  Start with finding a space and you work your way toward uncovering it’s story…how can I use that balcony? An audience won’t fit in that passage all at once, how can I move them through it?  The light coming from that door is amazing, what could it frame?  Also, I’ve found that working with restrictions can push my creativity.  Our recent production of Alice in Wonderland played for audiences of 120, four times larger than audiences for our previous shows, forcing us to rethink our process.  We had access to many small passageways and chambers, and also a big outdoor plaza, so we divided up our audience to look for Alice in the small areas, then regrouped in the plaza for Alice’s meeting with the Red Queen.  The restrictions of the space showed us how to move our audience and structured the narrative arc of the play.

Which brings us to audience.

Immersive theatre crafts experience for the audience.   Basically from the beginning of the process we are asking ourselves two questions: 1. How are we inviting this audience into this play? 2. Who are we asking the audience to be in this experience?  The invitation is huge. In our first play, Slip River, our audience was going to need to move quickly through dark passages to keep the narrative thread alive.  The first scene was in a classroom with a faux lecture on “Orphanism in the 1800’s,” so when the fluorescent class lights went out, and the audience was plunged into the 1800’s, it was the Professor who invited everyone to join the escaped orphan Sly and stayed with them through the twists and turns of the play.  Casting the audience helps them understand how they interact with the world.  In Slip River the audience was cast as escaped orphans, giving a token to find their way and tasked with finding the Midnight Circus with Sly. Because in an immersive theatrical experience there is no proscenium insisting on a fourth wall the audience is more likely to be their lovely individuated selves which means that performers have to be prepared for any number of strange encounters.  During Alice (where our audiences ranged from 3 years to 86 years) a little boy tried to pee on the set.  The artful negotiation between actor, parent and child to keep the show moving without pee was pretty astonishing to watch.   In Wonderland the guides cast the audience as “helpers” trying to find Alice.  Maybe that little boy thought peeing on the set was helpful…or maybe we just need to give parents a map on the program that shows them how to get to the bathroom….

A note on revision

Crafting plays for an audience means bringing in as many audiences as you can for previews, soliciting feedback from them and making changes based on the distance between the audience experience and your expectations of the play.  The process of inviting a preview audience, engaging in their feedback and then using it to make last minute changes has been central to Underbelly’s process.  In truth, engaging in the entire process of immersive theater making has been invaluable to me as a playwright teaching me the potential of theatrical space and reminding me to shape my scripts as blueprints for audience experience.

View all posts by katiebenderplaywright